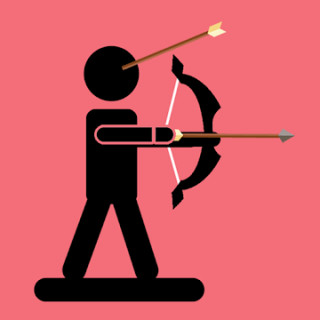 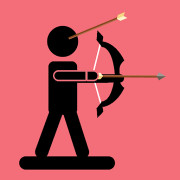 Archers is a simple arcade game that tells about a drawn little man who participates in battles against other stickmen, using a bow and steles.

Help the funny hero from sticks to survive. Stickmen attack him. Reflect blows with a bow and arrows. Drag your finger to aim and select the firing force, then fire the ammo. Do not forget to download hacked Archers for Android for free so that nothing will interfere with enjoying the gameplay. Better to direct all efforts to protect and eliminate opponents.

Try to hit the head right away for instant death. If the arrow hits the body or limbs, you will have to finish off with another shot. Sometimes an apple will appear over the heads of enemies. Shoot him to get life. Meet with several types of opponents. This game is the first part of the popular game The Archers 2. The difficulty also lies in the fact that rivals appear on different parts of the screen.

Orient quickly and shoot until enemies start shooting at you. Test agility, accuracy and reaction speed. An intuitive interface, simple 2D graphics, realistic physics and entertaining gameplay will allow fans of funny little people to have fun and relieve stress. There are no difficult tasks and missions, everything is very clear from the first seconds of the game.