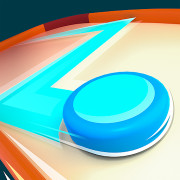 Battle Disc is a cool arcade game, very reminiscent of air hockey, but the goal is completely different, it is necessary to destroy all the enemy’s fortifications.

All fans of air hockey will definitely like this game, because the gameplay is very similar to it, but there are some differences in the main task. You and your opponent have fortifications behind you that need to be destroyed first than your opponent. Launch the puck in such a way that it bounces off the walls, becomes elusive and eventually destroys the enemy wall.

But most importantly, do not allow the enemy to catch the puck, because if he intercepts it, he can reverse all your progress and destroy all your structures. The game is made in such a way that initially you will learn the gameplay, correctly launch and catch the puck, and then launch it along an intricate trajectory and try to destroy the enemy base.

As you progress, there will be more and more enemies. The base will be defended by one, and two or three goalkeepers. We advise you to download the hacked Battle Disc for Android for free, the game has a very interesting mechanic that will allow you to knock enemies out of the field if they did not manage to intercept the puck. She hits the goalkeeper and literally throws him off the field. I would also like to say a few words about animation, which is very touching.

Mod “A lot of money” allows you to get a large amount of money to open all the custom elements of the game.