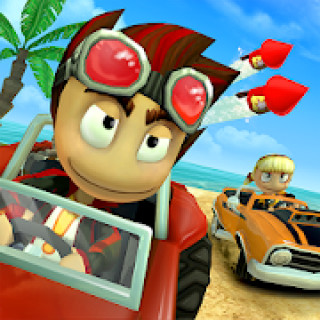 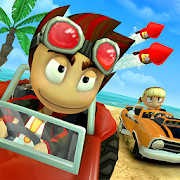 Beach Buggy Racing is the second part of the popular arcade game, in which even more crazy races await you.

Win competitions among other players, defeat strong bosses and earn bonuses and money. Use them to buy the best racing vehicles among sports cars, jeeps and even moon rovers. Those who want even more adrenaline will not ignore Beach Buggy Racing 2. In Beach Buggy Racing, unlike the previous Beach Buggy Blitz, even more dynamic gameplay and improved three-dimensional graphics.

15 fantastic, spectacular locations, including the jungle with ancient giant lizards, and swamps, and sandy beaches, and volcanoes full of fiery lava. Choose your favorite mode from 6 presented. Gather your own team of heroes, each of which has abilities: teleportation, trail of fire, spells to slow down rivals – just a few of them.

Spill engine oil or launch rockets and increase your chances of winning. Get into the standings and try to break out to the top of the list. The game will not leave indifferent fans of unrestrained races. In order to initially have access to great finance, it is worth downloading the hacked Beach Buggy Racing on Android for free.