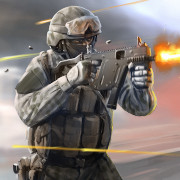 Bullet Force is an exciting action game where you will fight numerous opponents to survive.

Go to colorful locations where you need to fight, shoot and blow up to stay safe and sound. Take part in spectacular multiplayer battles for 20 players with gamers from all over the world. Gather a team of the same desperate soldiers who want to win. Kill every enemy using over 20 types of weapons.

Modify your barrels and buy colorful skins. You will have access to the famous Kalashnikov assault rifles, sniper rifles, carbines and much more. Numerous upgrades such as laser sights, optics and attachments will allow you to create the perfect weapon. 30 types of camouflage will make the soldier invisible in any conditions.

Choose from 4 modes among Team Deathmatch, Gun Game, Conquest and Free-For-All. Find yourself in an impenetrable jungle, among skyscrapers, in hot deserts. There is nothing easier than downloading the hacked Bullet Force on Android for free and increasing your chances of winning. Develop your tactical abilities, dexterity, agility and accuracy not only in this game, but also in Modern Ops, Forward Assault and Standoff 2.

Mod “Infinite Ammo” will allow you to see the nicknames of players through walls and endless cartridges.