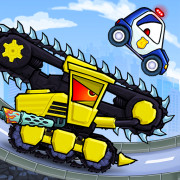 Car Eats Car 3: Car Survival and Street Racing is an epic racing game where you once again sit behind the wheel of toothy cars.

Your friends were arrested and sent to serve their sentences on the Island of Freedom. To help your buddies, you have to get to the jail and release them. But you will be confronted by the valiant police. They will try to arrest him first, and if they fail, tear him to pieces. But you are not that simple either. Collect power-ups and bonuses while driving.

Buy upgrades and upgrade your car. Make a monster out of him by adding weapons. Cannons, machine guns, rockets, freezing and electrical impulses will become available to you. Go around opponents or jump directly at them. Crush, blast, shoot and smash to smithereens. Discover the most dangerous and massive transport, among which there is a Harvester, Tankominator, Lokomashina and Frankopstein.

Compete with friends and other users from all over the world. Get to the top of the global leaderboard. Drive along city streets and off-road. Jump over trampolines, ride a loop, don’t fall into traps. If you want to download hacked Car Eats Car 3 for Android for free, it will be even more fun to play. And you can also get acquainted with the adventures of toothfish and drive at breakneck speed in Car Eats Car, Car Eats Car 2, Car Eats Car Multiplayer Racing.

Mod “A lot of money” will give you the opportunity to get a lot of crystals and endless gasoline.