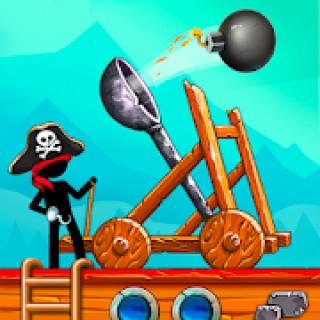 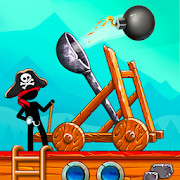 Catapult: Stickman Tower Defense – Pirate Ships is an additional part of The Catapult, in which you will help Stickman defend himself from pirate attacks.

Help the little man build a defense in an unequal battle. Enemies attack from all directions: from the air, from under the water and from the sea. But your hero isn’t that simple either. He has a wide arsenal, allowing him to destroy ships, airships and boats. Tap the screen and control the tension and direction of the flight of the nucleus.

Upgrade your catapult, making it the most powerful weapon. Buy ammunition, barrage mines, upgrade your tower, acquire skills. Let the pirates stay with their noses. Complete all 80 colorful levels and drown every enemy. Feel like a sea wolf, because you don’t even need to leave the house for this.

Bright two-dimensional graphics, convenient, intuitive controls, realistic physics will appeal to all fans of the genre, who will also appreciate the Catapult 2: Stickman game. If you want to make the process even more enjoyable, you should download the hacked Catapult: Stickman Tower Defense – Pirate Ships for Android for free.

Mod “A lot of money” will give you access to unlimited currency. Use it to buy the best consumables and expand the capabilities of your catapult.