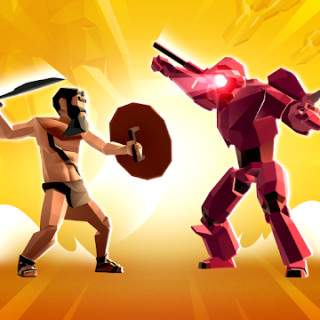 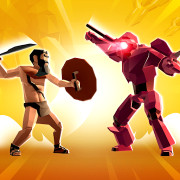 Combat simulator: War is an exciting strategy about the battles of soldiers and equipment from different stages of the development of human civilization: from the most ancient people to the warriors of the future.

What do you think will be the outcome of the battle between robots and primitive people, between samurai and knights, between cowboys and Jedi? The developers give a chance to find out. Indeed, in your squad, dozens of types of warriors related to antiquity, the Middle Ages, modern times, modern times and the future can fight shoulder to shoulder. Each unit has unique characteristics, appearance and weapons.

Upgrade characters, combine identical soldiers to get a warrior with improved abilities. You need to download the hacked Battle Simulator: War for Android for free so that you always have enough money. Change the location and composition of your squads, make each battle unique. Think over actions and strategy, wise tactics will allow you to defeat opponents even with minor efforts. Complete thousands of levels and use the rewards you owe to upgrade.

In Epic Battle Simulator and Epic Battle Simulator 2, you could have massive battles against warriors and mythical creatures. But the weapons and soldiers from this game will surprise you more. On one field, armies with tanks, helicopters, catapults, crossbows, horses, robots and mammoths will meet. Have fun completing tasks in the “Test Mode”, enjoy laconic graphics, elaborate animation and exciting gameplay with might and main.

Mod “A lot of money” will give you the opportunity to get an unlimited amount of money.