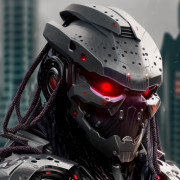 Evolution 2: Battle for Utopia is the long-awaited sequel to the infamous third-person shooter with strategy elements.

Events take place on the planet Utopia, which at one time was a favorite vacation spot for the rich of this world. But today it is a hellish crowd of fighting robots, dangerous criminals and ugly monsters. Here everyone is fighting for life and death. You will play as a character named Blake. A strong hero with superpowers obtained through experiments, smashes and destroys undead to the right and left.

With the passage of each level, the strength and abilities of enemies grows, and it becomes more and more difficult to defeat bosses. But the application provides for the improvement of the hero and his assistant, the purchase of new, newer, more powerful weapons and equipment, the use of the power of reason for struggle. You can also complete missions in the game by agreeing with other players. In battles shoulder to shoulder with other warriors, the forces will be on your side.

Having completed the mission best of all, you can get separate bonuses. Weapons of the future, several game modes, three factions of enemies, high-quality animation, excellent interface – the components of an ideal shooter. If you decide to download the hacked Evolution 2: Battle for Utopia on Android for free, the chances of winning will be even higher.

Mod “High Damage” will allow you to kill opponents with one shot.