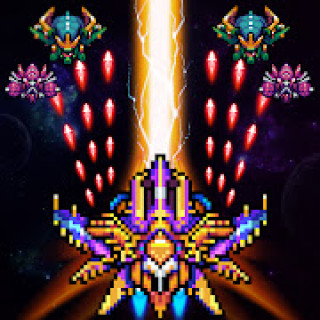 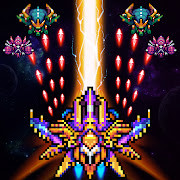 Falcon Squad: Galaxy Attack is a dynamic arcade scrolling shooter in which the player controls a spaceship and defends the galaxy from aliens.

A distant future, where human technology has stepped so far that humans have been able to explore deep space and even colonize planets. But of course the aliens did not like it and they went to war against the human race. An unexpected and dastardly alien attack shocked everyone, thousands of people died in a deadly battle, but you, the captain of the famous ship, were able to fight back and destroy the enemies in the first attack.

How many more attacks will be unknown, but one thing is clear, you are the hero who can stop the enemy. We have one game in a similar genre on our site, but the action time is significantly different: 1945 aircraft shooters. Try your hand at this game too! In general, this game is a classic star shooter, when your ship is at the bottom of the screen and shoots or dodges enemies.

For a long time, the game was at the development stage, while all the wishes of the players were taken into account here and bugs were fixed. But the time has come and the game is out, so we advise you to download the hacked Falcon Squad: Galaxy Attack for Android for free, because this is exactly the game that will drag you in for a long time. With its help, the player will be able to remember his youth, when games of this genre were popular. Do not underestimate the game, because the difficulty level here is not small, and the bosses will make you sweat.

Mod “A lot of money” allows you to buy new ships and weapons, regardless of the price!