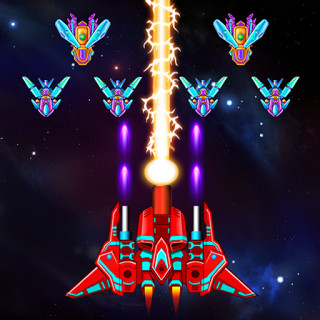 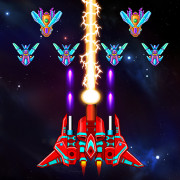 Galaxy Attack: Alien Shooter is an interesting arcade game where you will fight aliens while controlling a spaceship.

The game resembles Space Shooter: Galaxy Attack and will take you to the future when aliens attacked the Earth. Captain, it is only in your power to repulse your opponents and prevent the destruction of your beloved planet. Get into a spaceship and go to battle. Hordes of enemies will attack you with a united front. Some will try to ring your ship, but such obstacles will not stop the brave warrior.

In the beginning, you will not have the most sophisticated fighter, but gradually you will be able to change it, increase the combat power and improve the technical characteristics. Increase the number of guns and change the type of guns. We recommend downloading the jailbroken Galaxy Attack: Alien Shooter for Android for free so that these processes are only a pleasure. Blow up all the enemies, no matter how they look.

The developers created a design in the form of a classic arcade game, where you only need to move the ship across the field, and it will shoot automatically. Do not forget to collect the drop-down bonuses and new ships, this is the only way to defeat even huge bosses. Space backgrounds with constellations, nebulae of different colors and shades will give you the feeling of being immersed in a new reality.

Mod “A lot of money” will give a lot of crystals, money, VIP 12, all paid ships are also bought, a lot of points, god mode is open.