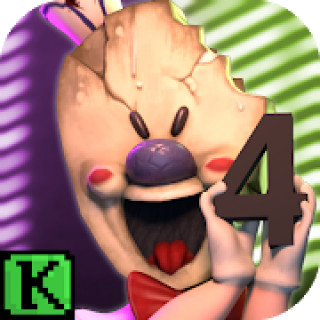 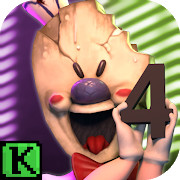 Ice Scream 4: Rod’s Factory is the fourth installment of the famous horror adventure, in which you will once again face the evil ice cream man and his minions.

A lot of horror games came from the Keplerians Horror Games studio, and now the fourth part of the game has appeared. This time, you and your friends ended up in the clutches of an ice cream maker who chased you all the previous parts. By the way, if you haven’t played them yet, then we strongly recommend that you familiarize yourself with them: Ice Scream 1: Horror Neighborhood, Ice Scream 2, Ice Scream 3.

Once at the ice cream factory, you will meet both the ice cream maker himself named Rod, and with his henchmen, in the person of the guards and the main assistant. Be extremely careful, because the main villain will be able to get to you in a matter of seconds. Initially, in order to escape from the cage, you need to be smart and unscrew the bolts, but this must be done so that no one suspects anything. Then, the fun begins – this is an adventure in a huge factory.

This time, the developers have made the world completely open. You will be able to wander around the factory, walk through the workshops without any load. This greatly affects the immersion in the game. The game is really very high quality, with solid graphics and an excellent original soundtrack. Therefore, do not miss the chance to download the hacked Ice Scream 4: Rod’s Factory on Android for free, especially since the fans have been waiting for its release for a whole year.

Mod “Menu” allows you to greatly simplify the game, thus, you can explore the factory more and learn all the secrets of the game. In addition, the number of traps will be unlimited, which will make life difficult not only for the ice cream maker, but also for his minions.