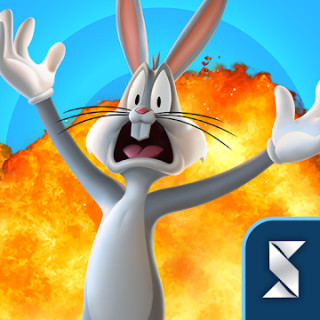 Looney Tunes CRAZY WORLD is a dizzying role-playing game with the famous characters of the cartoon of the same name, where you will fight opponents in a variety of ways.

Collect all the characters of your favorite cartoon. Bugs Bunny, Duffy Duck, Marvin the Martian and a dozen more heroes are ready to make a mess. Are you ready? Gather your team and go out to fight opponents. Shoot, explode, drop heavy objects, run over each opponent’s vehicles. Use anvils, revolvers, dynamite, bats, laser cannons, shotguns, giant hammers and even a piano.

Enjoy how your enemies explode, take hits, fall. Upgrade your heroes and make them faster, stronger, more powerful. Build your own city by creating it according to your plan. Open treasure chests and get gold, precious gems, bonuses, potions, chips. Fight in the desert, in the meadows, on the farm, in space. Immerse yourself in incredible battles where everyone fights to the last.

Three-dimensional graphics, cute and familiar characters, simple controls and addictive gameplay will delight not only Looney Tunes lovers, but also connoisseurs of the genre. You also need to download the jailbroken Looney Tunes for Android for free if you want to get a better chance of winning. And then you can go on a journey with other cartoon characters in Rayman Adventures.