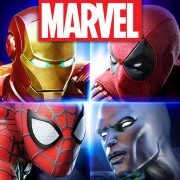 MARVEL Strike Force is an action-packed RPG where you will face superheroes and supervillains from the MARVEL universe, who will unite against a common enemy.

A threat from the outside looms over the Earth, so the heroes and villains of the MARVEL series: Contest of Champions, MARVEL: Avengers Academy, MARVEL Future Fight, MARVEL: Puzzle Quest, MARVEL Super War will have to put aside bickering and unite against a common enemy. Collect a team of the most famous characters: Iron Man, Groot, Rocket raccoon, Thor, Loki, Spider-Man, Doctor Strange, Venom, Electra and many others.

Equip your fighters with weapons and equipment that will improve their already strong abilities and skills. Unite heroes and antagonists to create deadly bundles that can repel even the most powerful opponents. Watch as heroes and villains perform dizzying combos from just a few taps on the screen. Spectacular video sequences will allow you to enjoy every movement.

Colorful graphics, recognizable characters, exciting gameplay, simple controls will impress any connoisseur of MARVEL. Also, it will not be difficult for you to download the hacked MARVEL Strike Force on Android for free if you want to make the gameplay even more fun. Relax and have fun together with your favorite heroes, united with sworn enemies.

Mod “A lot of energy” will always allow you to win the battle with a score of three stars.