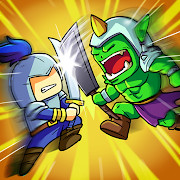 Mega War – Clash of Legions is a dizzying strategy game where you lead armies in the war of humanity against the orcs and try to win every battle.

The game takes place in a fantasy world where people and orcs have fought for supremacy since ancient times. Go through exciting levels of the “Campaign”, watch the exciting story unfold. Or enter the arena against the armies of other players in the “PvP mode”, trying to destroy enemies as quickly as possible.

Control the actions of each unit and come up with a strategy that will lead to victory. You should definitely download the hacked Mega War – Clash of Legions on Android for free, so as not to limit yourself to anything. Collect hero cards and invite Dragons, Elves, Demons, Valkyries, Undead and other mythical creatures. Send them into battle at the right moment.

Open chests full of treasures. Win awards and use them to develop your army. Travel the magical world and get involved in fights on the sides of ships, green plains, snow-covered slopes and dark forests. Be ready to meet with monsters, but if you win, they will join you. So the number of warriors will only increase.

Mod “A lot of money” will help you get endless game currency. (Click the gear in the upper right corner and click on the national flag to set the language to Chinese.)