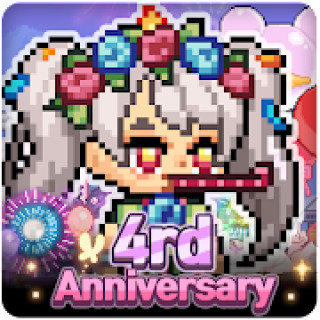 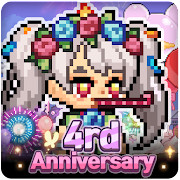 Merge Ninja Star 2 is a sequel to the pixelated RPG clicker, with new functionality and capabilities, where the main weapon is shurikens.

As in the first part, the player has to complete the levels playing as a little ninja, hurling shurikens at enemies. But this time the gameplay has changed a bit and the camera has moved from top view to side view. Thus, turning the clicker into a side-scroller with RPG elements. The essence of the game has not changed much, you combine identical shurikens, turning them into stronger ones, complete levels, destroy monsters and fight bosses.

Shurikens can also be pumped, making them more powerful and more dangerous. In addition, a number of interesting features have been added to the game. Now the player will be accompanied by pets, and the shurikens will have auras that increase DPS many times over. If you have not played the first part, then you can find it on our website: Merge Ninja Star. Battles with enemies will take place not only on the ground, but also in the air, for this special air levels were created.

Do not forget that the hero’s damage will directly depend on pumping shurikens, so do not be lazy and create more powerful weapons. Otherwise, you simply cannot cope with enemies. The game is very fun, it does not get boring, and we advise you to download the hacked Merge Ninja Star 2 on Android for free and try to create and pump a shuriken to the last level, which will literally destroy all enemies with one blow.

Mod “Free shopping” will allow the player to pump and get only the best weapons without any restrictions.