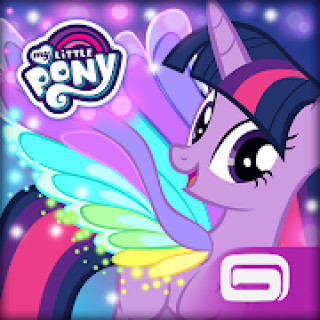 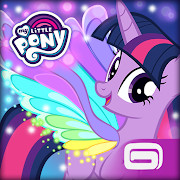 My Little Pony: Magic of the Princesses is a simulation game based on the cartoon of the same name in which you have to travel to a magical land.

According to the plot, the evil Moon Pony enveloped the whole country in darkness, because of which all the inhabitants left it. But the hero named Midnight Sparkle, for which you play, ends up in the empty and dark city of Ponyville. To return the country to its former light, it is required to drive out the darkness and light 6 altars. Convenient controls, bright graphics, a magical world, exciting adventures – everyone will get all this.

The game will allow you to spend time interesting and fun with familiar characters. The gameplay begins to unfold from the house of the Midnight Sparkle. You need to help the heroine open shops with ponies. Each purchased pony also earns in-game currency. To make them work longer and better, increase the number of stars by winning mini-games.

There are 6 types of them: Telescope, Apple picking, Mine chase, Dancing, Ball game and Flying. All game currency is divided into 3 types. You collect bits from shops. Hearts can only be sent by friends playing the same game. And stones that are very rare. They are supposed to be bought for real money. To solve this problem, you can download the hacked My Little Pony: Magic Princess on Android for free.

Mod “Free shopping” and unlimited money will give you access to a variety of game currencies without restrictions.