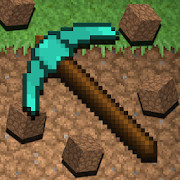 PickCrafter is a relaxing clicker about mining gems and metals with a pickaxe.

As in the World of Cubes – Exploration Lite Craft, Block Craft 3D in the game does not require any complex actions and efforts from you. Just tap the screen to make the pickaxe dig the biome. Even during your inactivity or absence, mining will continue. You will only have to harvest the “harvest” later. In addition to the usual land, you will test yourself in the study of the thickness of ice, snow, rock deposits and even the soil of Mars and the Moon.

To dig in them, you will need more powerful types of tools. Unlock and craft Legendary, Extravagant, Transcendental and Absurd pickaxes. Look for legendary, epic and rare artifacts that will add new characteristics. You will come across mythical machines and blocks to help you with hard work. Unlock 90 achievements and become the pickaxe swing champion.

Compete with your friends and increase your rating to the maximum. You will meet Bosses, defeating them will give you trophies. There is nothing easier than downloading the jailbroken PickCrafter for Android for free to make the game even more enjoyable. After all, the old-school pixel graphics and the original idea of ​​the game will not leave indifferent anyone who wants to have a relaxing time.

Mod “A lot of money” will allow you not to reduce the currency when you spend it; will give the opportunity to buy chests, even when there are no stones.