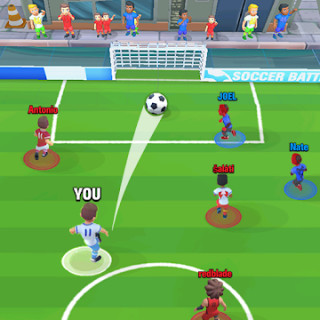 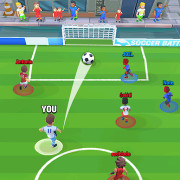 Soccer Battle is a colorful sports game in which you will play soccer against real players like yourself.

Take part in 3×3 multiplayer matches, where you will team up with 2 more players and try to defeat the opposing team. Try downloading the hacked Soccer Battle on Android for free to get the maximum amount of finance from the very beginning of the game. You will need money to buy upgrades and other items that will make the confrontation more spectacular.

Make spectacular passes, distract your opponents with maneuvers and kick the ball straight into the goal. Learn to work in a team so that every action is coordinated. Think over the trajectory of the ball, and the transparent pointer will show you where it will fly from a certain point on the field. Become a football star like in Soccer Stars, and then every player will only be glad to be with you in the same team.

Fans of football simulators will appreciate the cool graphics with a top view, a comfortable and sensitive interface, and an interesting gameplay. Spectators standing around the field only increase the atmosphere of the drive. Take part in tournaments with friends or find new ones. Use strategic thinking like in real football, kick, defend the goal and don’t let the opposing team win.

Mod “A lot of money” will provide an unlimited amount of game currency.