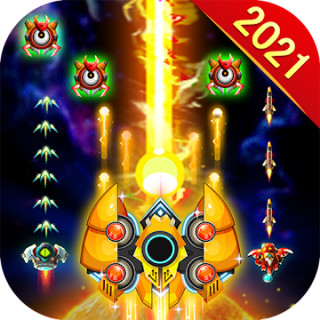 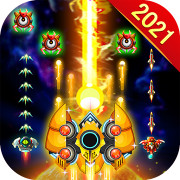 Space Hunter: Galaxy Attack Arcade Shooting Game is a furious arcade game in which you will fight against alien invaders in the boundless expanses of the Galaxy.

The cosmos is shuddering under the onslaught of hordes of aliens who have decided to take over the entire universe. Join space hunters who are fighting to save humanity. Control the ship, shoot and blast the armada of enemies. Use just one finger to move the ship across the playing field, avoid direct hits and do not forget to fire at the same time. Perform spectacular maneuvers to go around and deceive opponents.

Try to beat everyone. You can download the hacked Space Hunter: Galaxy Attack Arcade Shooting Game on Android for free to enjoy every minute. Accuracy, agility and speed of reaction will help you succeed. Generous rewards every day, a wheel of luck and unimaginable challenges will turn the player into an ace capable of single-handedly defeating both small beetle aliens and bulky bosses.

Mod “A lot of money” will provide you with unlimited coins, gems and energy, and the mod will not reduce the number of diamonds when buying chests.