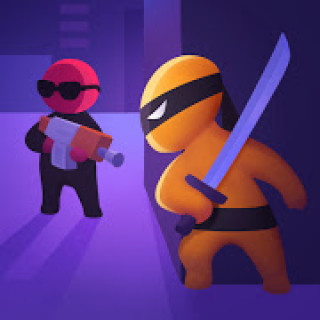 Stealth Master – Stealth Shooter is an exciting action game where you become a ninja and go to kill bad guys.

Start your fight for a just cause as an elusive ninja. Your hero decided to fight for justice, inspired by a character from Johnny Trigger and Johnny Trigger: Sniper. Sign contracts and take orders to eliminate criminals. Earn money, because you will need it to buy the necessary weapons, costumes, equipment and even abilities. Be always vigilant and careful, enemies can pretend to be anyone.

Use your wits and composure to reach all goals. Change your appearance if you don’t want to arouse suspicion. You can try on the appearance of 4 more characters. Don’t waste your ammo and only shoot when necessary. Disarm several opponents at once and do not arouse suspicion from others. Each contract will take you to a new location that you need to thoroughly study.

Don’t just engage in murder, but also find ways to open locked doors. Avoid traps such as laser alarms. Hurry up to download the hacked Stealth Master – Stealth Shooter for Android for free to provide yourself with everything you may need. Get to the boss, which will be very difficult to kill. It is only in your power to stop him and prevent him from committing even more atrocities.

Mod “A lot of money” will unlock all skins, turn off the display of ads after each level and give a lot of money.