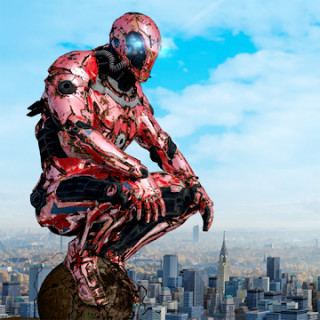 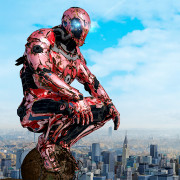 Super Crime Steel War Hero Iron Flying Mech Robot is a fantastic action game where everyone can become a superhero and protect the city from crime.

Become the one who will clear the streets from the power of the mafia and gangs. You are a superhero and avenger who wants to make your beloved city safe and free. Complete missions, arrange shootouts and explosions, destroying the mafia day after day. Use your super powers with might and main. Shoot lasers from your eyes, fly, effortlessly climb skyscrapers.

Most of the battles will take place on the street, but to complete some missions you will have to go into the premises. Steal vehicles from criminals. Drive cars, motorcycles, tanks, control a robot and even fly a helicopter. Do incredible stunts on the road by pressing the gas and brakes. Do not offend the police, because you are doing the same thing. Practically.

Stop by the store for cool and trendy clothes or accessories. You should download the hacked Super Crime Steel War Hero Iron Flying Mech Robot on Android for free if you don’t want to limit yourself in anything. Explore the open world, destroy gangs from China, Russia, Mexico and Japan. If you want even more drive, but already in the world of the future, join the heroes of Superhero Battleground. Be a gladiator and survive where everyone wants to kill each other.

Free Shopping Mod will make it so that you get free purchases for real money.