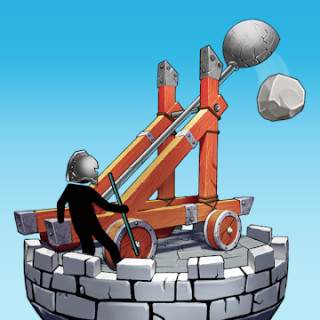 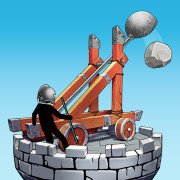 The Catapult is a fun action game in which you will help Stickman defend his fortress.

Enemies have laid siege to your hero and are relentlessly throwing cannonballs. For defense, initially you only have a catapult and cobblestones. Destroy opponents, accurately launching ammunition and earn money for each defeated. Click on the screen and pull to charge the catapult. Think over the flight path and release the ammunition. If you earn enough money, you can upgrade the catapult and buy different bombs.

They are more powerful and allow you to kill enemies faster. Make a double catapult and even get a shield. Indeed, in each new level, the difficulty increases, the number of enemies increases and they throw more bombs. Can you defeat everyone? Two-dimensional minimalistic graphics without unnecessary details, intuitive controls, dynamic gameplay, realistic physics will appeal to every lover of such games.

If you want even more interesting tasks, pay attention to other parts of the series: Catapult 2: Stickman games and Catapult: Stickman Tower Defense – Pirate Ships. And in order not to experience a lack of money while playing, you can download the hacked The Catapult on Android for free.

Mod “A lot of money” will give access to unlimited game currency, for which you can buy many bombs and improvements.