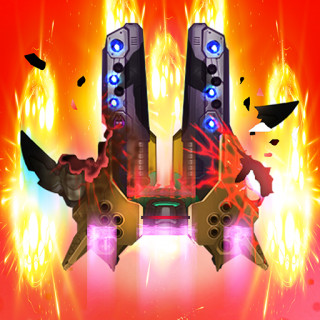 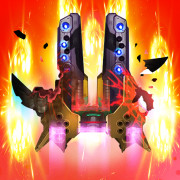 Transmute: Galaxy Battle is an arcade space shooter where, controlling a small ship in endless space, you will have to fight entire fleets of enemy ships.

A very dynamic and colorful scrolling shooter in which, as usual, the player will control a small but very powerful spaceship capable of destroying entire armies of enemies in a matter of moments. The graphics here are at the highest level, the sound effects also create an indescribable atmosphere of space battle, and the cannons with which you equip your ship destroy even planets.

The game’s plot is quite simple, but as interesting as other space odyssey. According to the plot, human technologies have developed so much and have gone ahead that they can now travel and conquer distant horizons, but bad luck, not all inhabitants of deep space want to put up with people and send their most powerful warriors and creatures to resist them. Keep in mind that in addition to the usual enemies, there are also huge destructive bosses, the design of which is very impressive. Therefore, we strongly recommend downloading the hacked Transmute: Galaxy Battle, which will appeal to any fan of games like this one.

The main difference between this game and others is that you can upgrade and improve the ship right in the course of the battle. This means that you do not need to wait for the end of the round to upgrade the cannon or the crew, this is done right during the battle. It’s really cool and doesn’t take any extra time. For example, a boss came out against you, who does not take a laser, it’s okay, we install missiles on the ship and kill the enemy. And also, on our site there is a wonderful and entertaining game of this kind: AFC Solar Squad: Space Attack.

The Free Shopping mod will allow the player to equip his battleship with the best equipment without any restrictions.