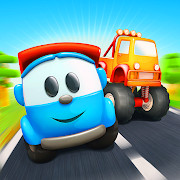 Leo the Truck 2: Constructor and Cars for Kids is a delightful educational game in which the characters of the popular cartoon introduce children to the peculiarities of transport.

Many children are familiar with the cute truck Levoy and his friends – the heroes of the animated series of the same name. In the first part, Lev’s Truck and Cars: Children’s Construction Set, you could talk and play with only ten cars, but 42 types of transport are waiting for you here. Among them are cars, racing cars, dump trucks, helicopters, airplanes, mopeds and boats. First of all, collect the transport by installing all the missing elements.

The name of each detail is voiced, it will not be difficult to remember at all. Then exciting adventures begin. We advise you to download Lev the Truck 2: Construction Set and Cars for Kids for Android free of charge to live them all. Swim in the blue water, take part in a rescue mission and dizzying races.

Play other mini-games as well, such as collecting colorful jigsaw puzzles from the cartoon. Cute characters, pleasant soundtrack, changing weather and time of day, simple controls and a variety of exciting missions will appeal to both kids and adults. Because in a playful way, children will pump logic, memory, attentiveness and cognitive skills. They will also become familiar with the concepts of friendship and mutual assistance.