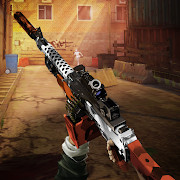 ZOMBIE HUNTER: Offline Games – a fierce third-person zombie action game in which the player armed with powerful guns must destroy crowds of zombies rushing at him and stay alive.

Awesome shooter with advanced graphics will put you in the belt and give odds to any action game with a zombie theme. ZOMBIE HUNTER: Offline Games are very cunning and clever zombies, they can attack you from almost anywhere, they crawl along the ceiling and walls, so you shouldn’t lose concentration and just waste ammo. A large selection of weapons allows you to equip yourself with any powerful cannon and shoot these bastards.

ZOMBIE HUNTER: Offline Games can be played without an Internet connection, which makes this game unique. In addition to a cool shooter, the game allows you to build shelters where all the survivors will rest. The player can develop other types of buildings, for example, a mini-factory to get parts for weapons and equipment, create food and much more, which will be very useful in the conditions of the apocalypse.

We recommend downloading the hacked ZOMBIE HUNTER: Offline Games for Android for free and trying to survive in this difficult world. The plot of the game is very simple and trivial. In 2080, a deadly outbreak of a terrible virus occurred in the world, where people began to turn into mindless zombies who now and then want to feast on human flesh. You are one of the survivors who is able to stand alone against a whole army of zombies.