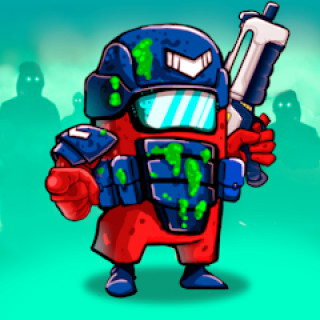 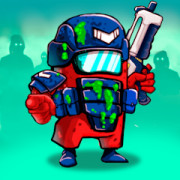 Zombie In Space Shooter is an unusual action game that tells about a group of mercenaries who are sent to the epicenter of the invasion of the walking dead on a distant space station.

The zombies have also reached the space station, which is located far among the stars. A message has been received from Hyperion that monsters are attacking. A small detachment of the military was sent there to find out the details. You will be one of the mercenaries who are also tasked with finding a rare and incredibly valuable artifact. All corridors and rooms are fraught with unimaginable danger. Zombies never sleep, they follow your brains.

Explore room after room, eliminate every creature so that they do not rise again. It is worth downloading the hacked Zombie In Space Shooter for Android for free if you want to make the gameplay even more attractive. Load your weapon, aim, shoot and blast vile creatures. Collect an arsenal of classic battle rifles and ultra-modern plasma cannons.

Defeat monsters that differ in appearance and other characteristics. Defeat ordinary zombies, evil spirits with machetes, clowns and bosses who do not know pity. Pump over the skills and abilities of the character. Complete all the tests, open bonus levels with generous rewards and prizes. And remember that during the operation you will not only have to destroy the undead, but also find the artifact, learning more about the events that have taken place.